Yesterday (Friday the 13th of January) we drove over to Lake Charles, for the Central Gulf Coast Boat, Sport and RV Show. I think this was primarily a Dixie RV Show, with other dealers bringing what Dixie wasn’t showing. 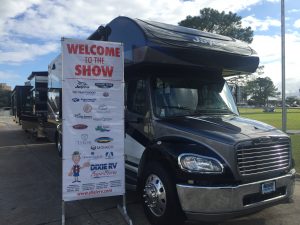 There was one Super C motorhome, but we didn’t spend any time on it. There were a lot of class A gasoline motorhomes there by Thor, Winnebago, Jayco, and others. But besides taking a quick look at a Thor gasoline toy-hauler, we didn’t bother with them.  That was because we still had a long drive back to Houston facing us and we just didn’t want to waste driving time on coaches of no importance to us. The big class A diesels were Tiffin and Entegra. They pretty much had one of everything, in those lines. They also had an American Coach there – the Revolution – that was quite impressive.

Entegra was represented from Insignia to Cornerstone

As Becky and I have seen before, both Tiffin and American make very fine motorhomes. But we were more impressed with the Entegra. American Coach doesn’t have a floor plan that meets our needs and the Entegra just seemed to be a percent or two better on several counts that we consider important, than the Tiffin. In fact, it’s so close between those two, that we could easily change our minds, before we buy. We really like the American Coach, but as I said, we just can’t find one that fits our requirements. We both think that American has, by far, the best interior designers of all production motorhomes (period). They just don’t have a floor plan that suits us. If they did, I think our decision would be made. Bummer…

Tiffin was well represented at the show, too.

We did do one thing that we really wanted to do at the show and that was talk to an Entegra rep. Todd Hahn, who is the Regional Sales Manager for Entegra, was at the show and he was very helpful and informative. He answered all of our technical and design questions, regarding the various Entegra models.

Speaking with someone from Entegra was important for us since, to our knowledge, Entegra will be the only major brand of production motorhome that is NOT represented at the Houston RV Show, next month. We can speak with representatives from all of the other manufacturers at that time. But the Lake Charles show would be the last chance we would have, to talk to an Entegra representative, till we make our road trip to Indiana, in a few months.

The Lake Charles show was certainly not the biggest show in the world. But we found it to be well worth the drive. Now we can hardly wait for the 53rd Annual Houston RV Show, in February. I’m told that it is the largest all-indoor RV show in the world. But then, that’s to be expected, isn’t it? After all, everything is bigger and better in Texas.

Becky and I have always loved traveling. We have been on numerous cruises both in the Caribbean and the Mediterranean. In fact, we have been on so many cruises that we even wrote a book about cruising (under the pen names of Reginald and Lillian Carpenter). We lived in London for a time and, as a part of an import-export business that we ran, we traveled to various places in the Far East.

So, as Becky is preparing to retire (I’m already retired), we began to think about what we want to do and it dawned upon us that we’ve seen more of other countries than we’ve seen of the United States. That started us thinking about morotcoaches. Though we have never owned an RV of any kind, we knew a lot about them. We have both done a fair amount of title abstracting and many people in that business own fifth-wheels, for when the job requires travel, which it often does. In fact, we were seriously looking at fifth-wheels, before Obama blocked the Keystone XL Pipeline and the price of oil dropped. Between those two events, it effectively put us and thousands of pipeline workers out of work. Although we didn’t need the work, this did mean that there was no longer any reason to look at fifth-wheels.

But to get back to the subject of our recent decision, what this all boils down to is that we already knew quite a bit about RVs, going into this decision and a lot about fifth-wheels. One of the things we had learned, is that if you are going to park your RV for long periods of time, as you do if you’re working pipelines, you probably want go with a fifth-wheel and if you’re going to be on the road a lot, you’re probably better off with a motorhome of some sort. So while we knew something about RVs, we knew little, at all, about motorhomes. Over the last several months, we have learned a lot.

We’ve been to every motorhome dealer in Houston – some multiple times. We spent a whole day in Alvaredo, at Motor Home Specialists. We went to the 2016 Dallas RV Show and just returned from the Lake Charles Show (I’ll tell you about that show in another post). As I write this, we just returned from yet another afternoon at Holiday World and Camping world, in Katy, Texas. We expect to pull the trigger some time this fall and hit the road, full time. But before we do that, we expect to take a road trip to Indiana, to visit the various manufacturers and see how these things are built.

We’re looking for a big diesel pusher (42-45 feet, with a TAG), all-electric, with nothing less than 450 horsepower. Yes. We realize that you can’t park a 45 footer in most national and state parks. But we’re prepared deal with that. We’ll be towing a Jeep Cherokee, so if we have to, we’ll park elsewhere and drive the Jeep to park. The leading motorhome candidates, at this point, are Newmar and Entegra. Although we can’t rule out Tiffin and Tuscany. We have not yet set a solid price point.

Follow along, as we learn more and post our findings, especially if you too, are looking for a first motorhome. We’re both detail oriented – just in different ways. I’m an engineer, so if you’re into build quality, construction, performance, or specifications, you’ll probably find my posts to be of most interest. On the other hand, Becky is a CPA, so if you’re into the economics of the situation or the aesthetics and amenities of the coach, then you’ll probably find her posts of most interest.

By the way, we’ll probably make more than our share of mistakes and we’ll share those with you, too, so perhaps, you won’t make the same mistakes. Then you can make your own and share those with us.

Remember that when you’re full timing, “Home is where you park it.”

Full-Timing the USA is about traveling the USA and Canada, full-time, in a Class A (diesel pusher) motorhome, with a dinghy. But more than that, it’s a log of our adventures, starting from our decision to sell our bricks and sticks home, in favor of life on the road, in a motorhome, through our purchase considerations, and ultimately our travels, our learning experiences (gotchas), and the rewards of living in an ever-changing environment.

We’ll share what we learn and what we’ve seen. As we get out on the road, we’ll share stories from other motorhome adventurers. But to start, we’ll be sharing our search for the perfect motorhome.

We’ve already been to every motorhome dealer in the Greater Houston Area. We’ve also traveled up to the Dallas RV and motorhome show and to Alvarado, to visit Motorhome Specialists. We expect to visit the huge Houston RV and motorhome show, in February and to eventually travel up to Indiana and elsewhere, to see how the motorhomes are made.

We invite you to share our experiences, as we set out on this new adventure and hope to meet you on the road some day.

Address
Home is where we park it.
In the future, watch this space
to see where we are.

Full-Timing the USA is about the adventures of John & Becky Gaver, as we select a Class A motorhome, equip it, and take to the road on a full-time adventure across the USA and Canada.

The story begins with our decision to sell our bricks and sticks home, in favor of life on the road, in a luxury motorhome. It continues with our search for the perfect coach and our ultimate purchase. Finally, will be the continuing story of our travels and our learning experiences (aka: gotchas).

We'll share photos, videos, stories of our own and of other full-timers and part-timers that we meet along the way. We'll include occasional reviews of RV parks, motorhome accessories, tips and tricks that we've learned, and more.

We hope that most RVers will find this blog of interest, whether they drive a large Class A motorhome, pull a small camping trailer, or have anything in between. We'll try to keep it interesting for a large audience. Just know that our primary focus is full-timing in a large, all-electric Class A (diesel pusher) motorhome, with a tag axle and a dinghy, because that's what we'll be driving. See you on the road.

We'll be full-timing, so
"Home is where we park it."

We personally use and like these products. We have given each a 5-Star review on Amazon.