We realized some months back that, whatever motorcoach we ultimately purchase, we will need to have it professionally inspected, before we drive it off the lot. Interestingly, I’ve learned that even applies, albeit to a lesser degree, to brand new motorcoaches, purchased at the factory. But when I got to thinking about what kind of inspector I would want to hire, to inspect our prospective motorcoach, I realized that there was going to be a problem.

So I got to thinking (which is something I’ve tried to avoid, since retiring). I’m an engineer. At least that’s what my degree says. To get that degree in electronics, I put myself through college, in part, by being a motorcycle mechanic. I’ve also rebuilt automobile engines. Later, when I was running large computer departments, I had to learn all about backup generators and HVAC (high volume air conditioning) and its associated plumbing and electrical issues. In fact, when looking at the list of tools that an RV inspector needs, I realized that I already have all of those tools and more, in my tool box. In other words, I have, not only the aptitude and background needed, to become an RV Inspector, but the required tools and a knowledge of how to use those tools. It seemed like a natural fit.

Long story, short… I decided to become a Certified RV Inspector, so I can do my own inspection. That way, I’ll know that the guy doing the inspection of my prospective motorhome, is as knowledgable and obsessive as I would be, since that inspector will be me. And, who knows? I may find some folks on the road, who need a really obsessive compulsive RV inspector.

I’m looking into classes, now and expect to have my certification, before we make our purchase.

OK. This is one great product for holding your smartphone, in a motorhome.

Although I originally purchased the Newward Universal Car Phone Mount for my truck, I immediately saw that it will be a great addition to our motorhome. The key feature is that it’s LONG –  long enough (13 inches) to be of use on a motorhome windshield or side window. Most smartphone windshield mounts give you nowhere near that long a reach. It’s also rigid enough to hold even a large smartphone, like the iPhone 6+/7+ or Galaxy. But it’s not absolutely rigid. It’s still bendable – just not with the weight of a smartphone.

The arm is basically a thick piece of aluminum wire, with black thermoplastic insulation around it. It’s not round, like most wire, but has an oblong cross section. I imagine that if it were round, it would be about 2 gauge or thicker (for those of you who are not engineers or DIYers, that’s thick). Since it’s wider than it is thick, it means that there is more strength from side to side, than up and down. I’ll get into that in a moment.

On most motorhomes, your windshield is generally a fair distance from the driver. So a smartphone mount that is only 5 or 6 inches long leaves your phone out of reach of the driver. At 13 inches, this is the longest smartphone windshield mount that I’ve found. So whether you are using your smartphone to keep up with Waze or some other GPS/mapping app, or you just want to be able to see who’s calling, without taking your eyes off the road, this mount should place your smartphone close enough to the driver to make it useful. Though I tend not to touch my phone, when driving, I do occasionally tap a couple of icons in Waze, to report traffic congestion, an accident, or police spotted. But with the phone just barely out of my line of sight and close to me, I can place the heel of my hand on the gear shift, to stabilize my hand, and tap the phone, without having to look away from the road.

The Neward smartphone mount comes with a dashboard support pad that you can attach, to stabilize the phone. My phone actually rests on the dashboard. But I suppose that for some installations, this pad would be useful. I just attached the pad to my mount arm, as a place to store the pad, in case I ever need it in the future.

Now let’s talk about that oblong cross section. With the phone mounted, with the widest cross section horizontal, as shown above, it’s greatest strength is from side to side. This keeps the phone from swinging around, on sharp fast turns. But, unless you’re completely insane, that’s not going to be an issue in a motorhome. However, if you plan on installing this mount in your car or truck, you should know that I have tested this side to side strength in my truck and found that the phone moves from side to side only about an inch, when I accelerate into a sharp turn (almost, but not quite, drifting the truck). That’s stable.

But what this means for mounting it in a motorhome, is that you can mount the device on your side window, with the long cross section vertically oriented. This will give you additional weight stability for your phone, so it won’t be bouncing up and down, even on a bumpy road. The narrow axis will then be oriented from front to rear. However, since you aren’t going to be doing any jack-rabbit starts in a motorhome and will be doing everything possible to avoid slamming on the brakes, the strength on that front to rear axis is not going to be an issue.

One of the other things that I like about this smartphone holder is that it’s very easy to attach and remove your smartphone. Most smartphone holders have an awkward spring-loaded clamp that requires both hands, in order to spread the spring-loaded mount to attach or remove your phone. This one is spring loaded, but in the opposite direction. By that, I mean that it’s spring pushes outward, to open the jaws of the mount. To attach the phone, you simply hold your phone into the open mount and squeeze the mount shut, with fingers of the same hand, until it is tight against the phone. You’ll hear little clicks, as the mount passes each detent latch. To remove the phone, place your hand around the phone and press the release button with a finger of the same hand. The button releases the latch that is holding the mount closed and it will spring open. Your phone will be in your hand.

You can mount the phone either vertically or horizontally, thanks to a 360 degree mounting ball. If mounting the phone vertically, there are two support arms that can be folded out from the base, to give the phone additional support. Since these arms fold, it means that you can adjust them in such a way that they won’t block your power cord or other attachments. Since I mount my phone horizontally, I just keep those arms folded in all the time. That ball mount also makes it easy to swing the view of the phone to the passenger, without taking the phone out of the mount. 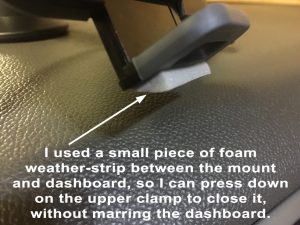 Also, since I mount my phone in landscape mode, I have chosen to add a piece of narrow vinyl foam tape to the clamp piece that sits on the dashboard. This allows me to just press down on the upper clamp, to lock the iPhone into place. Without that foam tape, the act of pressing the clamps together, by pushing the clamp against the dashboard, would risk marring the dashboard, over time.

All in all, this mount appears to have only up-sides and no down-sides. I give the Newward Universal Car Phone Mount a five-star rating.

Address
Home is where we park it.
In the future, watch this space
to see where we are.

Full-Timing the USA is about the adventures of John & Becky Gaver, as we select a Class A motorhome, equip it, and take to the road on a full-time adventure across the USA and Canada.

The story begins with our decision to sell our bricks and sticks home, in favor of life on the road, in a luxury motorhome. It continues with our search for the perfect coach and our ultimate purchase. Finally, will be the continuing story of our travels and our learning experiences (aka: gotchas).

We'll share photos, videos, stories of our own and of other full-timers and part-timers that we meet along the way. We'll include occasional reviews of RV parks, motorhome accessories, tips and tricks that we've learned, and more.

We hope that most RVers will find this blog of interest, whether they drive a large Class A motorhome, pull a small camping trailer, or have anything in between. We'll try to keep it interesting for a large audience. Just know that our primary focus is full-timing in a large, all-electric Class A (diesel pusher) motorhome, with a tag axle and a dinghy, because that's what we'll be driving. See you on the road.

We'll be full-timing, so
"Home is where we park it."

We personally use and like these products. We have given each a 5-Star review on Amazon.